The capital Budapest is a beautiful and exciting city, located in the heart of Europe often called as the “Little Paris of Middle Europe”.

The capital of Hungary offers you a wide range of sightseeing attractions and a spectacular panorama embracing the Danube. Its two sides, the hilly Buda and the flat Pest are connected by nine bridges. The historical monuments and the diverse city quarters reflect the city’s own 1 000 years old culture and history, the Buda Castle with the ancient town district; the St. Stephen’s Basilica, the Parliament and the Chain Bridge are the symbols of it. The city is full of cozy cafes, museums, galleries and restaurants not to mention the famous baths and pools due to the country’s rich thermal spring water.

Beside the aforementioned attractions you should definitely visit the Gellért Hill with the Citadella which is easy to reach through a walk or by bus. On the Pest side of the city you can find one of the largest synagogues in the world, the Dohány Street Synagogue, and Heroes’ Square. The square lies at the outbound end of Andrássy Avenue next to City Park and also gives a home to the Museum of Fine Arts. If you still have some spare energy you can take a walk on Váci Street and Vörösmarty Square which are the most popular areas for going on a shopping trip.

Hungary is in the top 20 destinations in Europe according to Tripadvisor. Despite its relatively small size, the country is home to numerous World Heritage Sites, UNESCO Biosphere Reserves, the second largest thermal lake in the world (Lake Hévíz), the largest lake in Central Europe (Lake Balaton), and the largest natural grassland in Europe (Hortobágy). Today we have 8 locations registered on the World Heritage List by UNESCO: 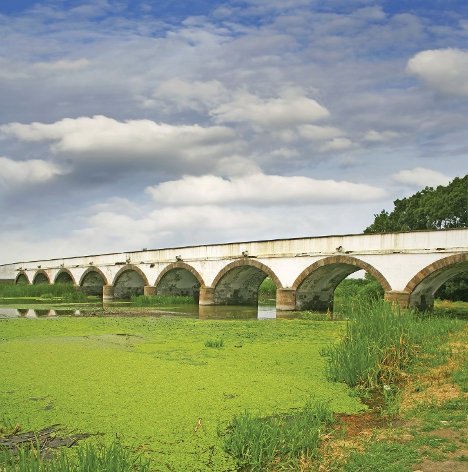 10 facts you may not know about Budapest

1. Budapest has the third largest Parliament in the world

The Hungarian Parliament covers about 18 000 square meters and it has more than 20
kilometres of stairs, 691 rooms and 90 statues on the façade. If you intend to see the historic
building, guided tours are available for visitors to explore the Main Staircase, the Old Upper
House Hall and the Lounge, as well as see the coronation jewels.

2. Budapest is home to the second-largest Synagogue in the world

3. Budapest has the oldest metro line of continental Europe

The Budapest Millennium Underground is the only metro system in the world which is part of
the UNESCO World Heritage Site. After the London Underground, the metro line is the
second largest in the world, which celebrated its 1000 th anniversary in 1896. The line is still
operating today between Vörösmarty tér and Mexikó út.

4. The secret subterranean world of Budapest: the Budavári Labyrinth

Beneath the city of Budapest, there lies a subterranean labyrinth, which consists of over 200
caverns. The most famous cave is the 3 300 km long Budavári Labyrinth locating right
underneath the Castle Hill in Budapest Old Town.

5. Fisherman’s Bastion and its seven towers represent the Magyar tribes

The Bastion is named after the Guild of Fishermen, which was responsible for defending the
city walls during the Middle Ages. The seven towers of the architecture represent the seven
Magyar tribes who founded the present-day country in 895 in the Carpathian Basin.

6. Budapest has the greatest number of spas in the world

In 1937, the International Spa Association elected Budapest as the “Capital of spas” because
Budapest is the only major city worldwide that has 118 medical sources and wells.
Additionally, Budapest is the only capital in the world where 5 historic thermal baths can be found.

In 1877, Vilmos Zsigmond – the Hungarian mining engineer – found a thermal spring beneath
the surface. More than a decade later, a magnificent building was designed over the fountain
by the famous Hungarian architect, Miklós Ybl. The fountain was unfortunately demolished
during the construction works of the Millennium Underground. The only sign of the former
discovery is indicated by a simple brass plaque in the square.

8. The world’s first public park is located in Budapest

After the order of Maria Theresa, this part of the capital was completely redesigned from
marshland into a park, planted with trees. The park’s first promenades were created at the end
of the 18 th century, and thus the world’s first public park was established: the City Park of
Budapest.

The Budapest Zoo and Botanical Garden is one of the oldest zoos in the world. It opened its
gates to the public in 1866 and it is home to a number of Art Nouveau buildings and rare
animal species ever since. If you wish to visit the Budapest Zoo, you can easily approach it on
foot as it is next to the City Park and Heroes’ Square.

10. The St. Stephen’s Basilica has the biggest bell in Hungary

The Szent István Basilica has the biggest bell in Hungary, which was casted with exactly 9
tonnes of iron. Interestingly, the building not only has record-breaking numbers concerning
bells, but it is also the biggest church in Hungary.